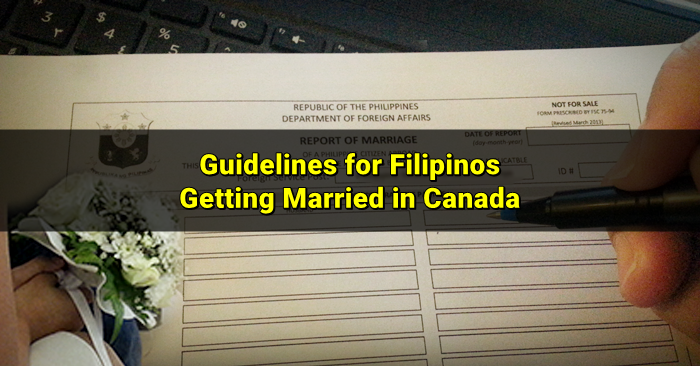 For Filipinos currently residing in Canada and would like to process report of marriage, You can do so by going to the Philippine Embassy who can help you for the same. Below are the steps and requirements to accomplish:

Note: Consular Officers are authorized to solemnize marriages between two Filipinos who are legal residents of British Columbia, Alberta, the Yukon and the Northwest Territories.

Pinoy Marriage Guidelines at the Philippine Embassy in Canada

Ø A marriage where one or both of the contracting parties is a Filipino citizen must be reported to the Consulate in order for the said marriage to be properly registered and recorded with the Office of the Civil Registrar General in Manila.

Ø ​In general, divorces between Filipinos are not recognized under Philippine law, wherever the decree is obtained.  However, in the case of mixed marriages e.g. between Filipinos and foreigners, Philippine law would allow a divorced Filipino to re-marry, if the alien spouse initiated the divorce proceedings.  In this case, however, the Filipino spouse may be required to show proof or document of her previous husband’s foreign citizenship.

Ø Decrees of annulment issued by Philippine courts pursuant to the Family Code would allow Filipinos to re-marry.  A judicial decree declaring the nullity of a marriage from the beginning would allow re-marriage.

Ø The marriage between two Filipinos, or a Filipino and a foreigner, solemnized in British Columbia, Alberta, the Yukon and the Northwest Territories should be reported to and registered with the Philippine National Statistics Office through the Consulate General.

Requirements that need to be submitted:

A.  Original and four (4) photocopies of Certificate of Marriage (submit the long form) issued by the Vital Statistics Office of Canada;

B.  Notarized Affidavit of Late Registration of Marriage if being reported after twelve (12) months from the time of marriage;

D. Original and four (4) photocopies of Certificate of No Marriage of Filipino spouse;

The Consular Officer reserves the right to require additional proof or documents from an applicant to prove his/her citizenship, status or identity pursuant to Philippine Passport Law (RA 8239) and the Foreign Service Act (RA 7157).

E. Original and four (4) photocopies of passports of spouses;

H.  Processing fee of CAN$ 31.25 in cash or money order/bank draft made payable to the Philippine Consulate General.  Do not send cash in the mail;

J.  One (1) original or certified true copy & four (4) photocopies of the Death Certificate of deceased spouse if either spouse is a widow/widower.​

(Note: ALL APPLICATIONS SUBMITTED BY MAIL OR BY A REPRESENTATIVE SHOULD BE DULY NOTARIZED.)

Applicants who applied in person but want their documents to be mailed back to them should submit a self-addressed prepaid envelope of a courier service of their choice along with the regular requirements.

(Note: If applicants choose to use the services of Canada Post, it is required that they purchase the “Signature on Delivery Sticker” to allow tracking of who signed for the receipt of their documents.)

17 thoughts on “How to Get Married in Canada (For Filipinos)”